So enjoy this pancake art of a Dumbo Tsum Tsum.

You are exactly who I want to be when I grow up. You are easily distinguished on a map, which is wonderful, because it guarantees that everyone can laugh when a bad movie inexplicably uses a map of you when it means a completely other country.

Your authors have a grand history of literature that extends longer than people might know. I haven’t read all of it, but I can say that I have yet to read an Australian author whom I did not like. That is special. I’m a horrible nit-picky brat. In particular, Jaclyn Moriarty is amazing.

All one has to do to invoke an image of bad-assery is to say your name.

There. Now everyone is thinking about explosions and surviving a battle to the death with a thousand t-rexes. Australia is unquestionably badass. We respond on a primal level.

You have the best beaches in the world. There is even a tax for them, but luckily it only affects people who want to buy video games.

Good night, Australia. Keep up the awesomeness levels. Nobody can touch you. 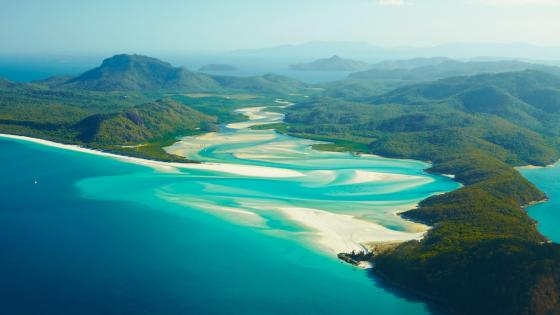 Wish you were here.

I am not against adventures in eating. In fact, phrased just that way, it makes me remember my favourite thing from Something a Week. However, I am against snack food basically being terrible.

It’s just such a waste.

Every now and then, Hubby and I go to the grocery store for one or two small things, usually the kind of thing that has a randomly occurring need or occasionally gets forgotten in a more routine trip, and we come home with some weird food that just looked interesting. Usually, it’s drinks. I have tried everything from Purple Stuff (yes, it does taste like carbonated grape Dimetapp) to Zuberfizz Chocolate Soda. I have yet to try the latter with vanilla ice cream.

Then potato crisps started to have the flavours of dinner. Biscuits and gravy, gyros, and something like garlic risotto, I’ve forgotten the ones I didn’t try. Some made even me stand back and say, “NO.” We got the first two, and yeah, those should have both been a no as well.

The gyro flavour were kettle chips, which was a good choice for type, I guess. They did taste of lamb, but more of (boring) pita, tomato and that awful red sauce that you can (mistakenly) choose instead of tzaziki. When I ate more than two, they started to just taste like licking a spice bottle. It was gross.

And biscuits and gravy just tasted like Regular with a faint idea that sausages might have walked by.

This is a really stupid topic, but I need some stupid topics right now. I am buried in books (almost literally) so that I can’t tell if I’ve destroyed my hobby or if I’m enjoying it to the point of addiction. I’ll probably review something like Shadow Breakers tomorrow. Hot dman was that book lacking. 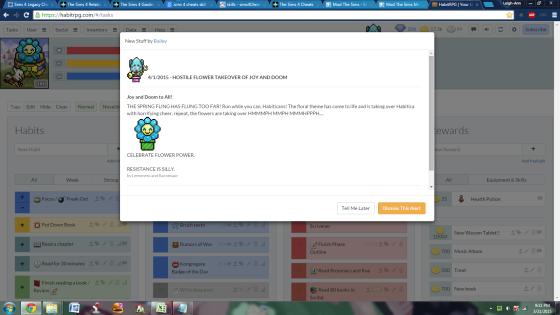 Joy and Doom to All!

THE SPRING FLING HAS FLUNG TOO FAR! Run while you can, Habiticans! The floral theme has come to life and is taking over Habitica with horrifying cheer, repeat, the flowers are taking over HMMMPH MMPH MMMHPPPH….

Anyway, I got this kind of early, which made it funnier. Also, I’m playing Sims 4 again. I figure I bought it, I might as well. Also doing my first by the rules for-realsies Legacy Challenge. Considering that Sims 4 is about the emptiest Sims base game ever, it should be an easy challenge.

I’m just being a jerk. The game is actually being fun, and I keep catching myself going to buy the expansion that came out today.

Getting insurance after Hubby became a full-time student has been rather a nightmare. When we finally did, guess what. They don’t cover any of our doctors, despite an inaccurate list claiming that they do. And getting a new rheumatologist is about as likely as Nevada becoming submersible. Quite frankly, it’s all I can do not to have whiplash-inducing flashbacks starring things like my previously deformed knee and a single fleece blanket pinning me to the bed.

Looks like the Medicare thing doesn’t even matter now. I can’t have enbrel without a doctor to prescribe it and insurance to cover it. I just… I’m so sick of all this shit.

The most fun thing I did today was to use my silly method of planning and free-writing. Every time I do it, it’s different. But it does always pretend to be a DOS command line. This time I tried to remember how actually executing a program looked like.

My first computer that wasn’t a borrowed Mac LC II was an Amdek 310a, which is pretty damn old school. It also explains my otherwise irrational love of plain text and amber text on a black background. 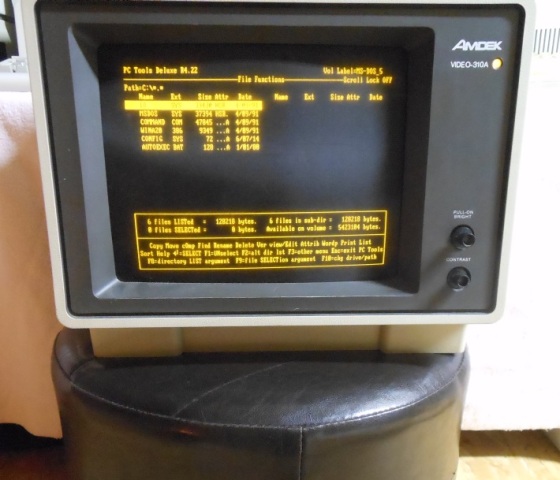 To this day, I miss the word processor. It was about the only thing that computer did, and I wrote stories that are completely awful and absolutely gone from this world. It was even better than when I had another school computer that came with a dot matrix printer when I was homeschooled-ish and taking a typing class. I wish I remembered what the WP was. Technically inferior to everything I use now. But nostalgia.

Oh well, I have FocusWriter with a similar theme. Which is probably better. I guess.

Apparently this is actually a problem. When I was really young–we’re talking first-novel-ever young–I remember writing a chapter or two, and then deciding that I had chosen the wrong perspective. I would go through what I had written and change all the I/my/me’s to she/her’s, and probably back a couple of times. I thought that pronouns were the things that made the difference.

Guess what. I was what, nine? That is not how third person perspective works.

Third person can delve pretty deeply into a character’s thoughts, so that isn’t the difference. You don’t necessarily get to know a character “better” or share thoughts that you otherwise wouldn’t if it weren’t in first person. What you do get in first person that you shouldn’t are the kinds of things that one person says to another.

As I stood in the centre of the stage, I felt sweat bead along my hairline. It wasn’t the lights. If anything, they were comforting. I won’t lie, I was melting. But the real problem was the silence. No pluralised butts in seats for me. I had only one person to impress, and he was the scariest possible person. The man who would hopefully become my boss.

Now just flit through that with a mere pronoun change. Does it work?

Sweat beaded along her hairline. Yet it was more than physical discomfort that had her perspiring. She was accustomed to the searing theatre lights, they were practically friends. Her true enemy was the silence. Even a pitifully sized audience would have filled the large space with breathing, coughing, shifting bodies.An audience of one was truly terrifying. Especially when that one was a possible employer.

Both of these perspectives have their merits, which you can hear about ad naseum all over the internet (and in books). Some people hate first person, some think it is the best. The point I had thought we all agreed on is that they are different.

But no. I just started reading a book that… sigh. Have you ever read a prologue and then said aloud, “Wow, I really should have skipped that one.” The rest of the book would have been fine, as far as I’ve seen from the first chapter or two. It’s just that… the prologue is in first person. It’s a fat expo-dump told in abrasive first person that sounded like a high school student trying to write a letter. (it’s supposed to be an adult) But the real problem is that when I got into the first chapter, the book itself is in third person… and is written in exactly the same style as the first person prologue.

It’s going to bother me through the whole rest of the book, I swear. It doesn’t help that I don’t like this woman’s voice. She sounds like the kind of stupid 90’s comic book heroine who picks fights over nothing and growls, “YOU WANNA MESS WIT ME?!” at bloody everyone.

So yeah. Third and First are different. Please don’t do what I did when I was nine. I was a kid, I didn’t know what I was doing.

Error: Twitter did not respond. Please wait a few minutes and refresh this page.